The five-fight SHOWTIME PPV telecast will begin at 8 p.m. ET/5 p.m. PT and be headlined by renowned content creator and undefeated professional boxer Jake “The Problem Child” Paul taking on the toughest challenge of his young career in the former UFC champion Tyron “The Chosen One” Woodley. The card also features the previously announced world championship showdown between Puerto Rican star and WBC/WBO Featherweight World Champion Amanda “The Real Deal” Serrano and super bantamweight world champion Yamileth Mercado of Mexico, which will serve as the co-featured bout.

A former junior welterweight world champion, Baranchyk will step into the ring to face the unbeaten Cleveland-native Montana Love in a 10-round showdown on the pay-per-view. Baranchyk seeks another run at the 140-pound title, while Love looks to score a career-best win.

The hard-hitting heavyweight Dubois, who is ranked No. 1 by the WBA, will face Joe Cusumano in a 10-round matchup, and Fury, the younger brother of heavyweight world champion Tyson Fury, will square off against combat sports veteran Anthony “Pretty Boy” Taylor in a six-round, 180-pound catchweight fight to open the pay-per-view telecast.

Additional action at Rocket Mortgage FieldHouse includes top-10 ranked junior middleweight and 2016 U.S. Olympian Charles Conwell taking on Lucas Bastida of Argentina in a 10-round fight. Paul, Love and Conwell will be fighting critical bouts in front of their hometown fans at the Cleveland arena.

Tickets starting at $45 are still available via RocketMortgageFieldHouse.com. The event is co-produced by SHOWTIME PPV and Most Valuable Promotions and promoted by Tony and Bryce Holden of Holden Productions. The pay-per-view telecast is produced and distributed by SHOWTIME PPV. Barstool Sportsbook is the official sports betting partner for the event and will be incorporated in a unique, fully integrated brand activation that is to be announced in more detail.

The Belarusian Baranchyk now fights out of Oklahoma and will look to move closer to another world title opportunity with a win August 29. Sporting a 20-2 record with 13 knockouts, the 28-year-old returns to the ring after fighting in the 2020 Fight of the Year against Jose Zepeda last October. The two fighters combined to score a staggering eight knockdowns in the instant classic won by Zepeda. Baranchyk became a world champion in 2018 by stopping then unbeaten Anthony Yigit in seven rounds. He steps in against Love, a graduate of the ShoBox: The New Generation series who owns a 15-0-1 record with seven knockouts. A highly accomplished amateur, Love will be fighting in his hometown of Cleveland for the second time in his career.

“This is a big step for me," said Baranchyk. "I am grateful to get back in the ring with someone like Montana after my loss. I want to show everyone that I’m back, I’m stronger, and I’m a new version of myself. I want to thank my fans for the support you've always given me. On August 29, it’s SHOWTIME, baby!”

“I know Ivan is a strong young fighter, but he has some ugly habits," said Love. "We're having a grueling camp right now and I'm going to keep it ‘Too Pretty' on fight night. Cleveland deserves the show I’m about to put on.”

A promising heavyweight contender at 23 years old, Dubois has compiled a 16-1 record with 15 knockouts since turning pro in 2017. Dubois had an impressive amateur career as a five-time British junior national champion. A London-native, Dubois’ lone professional loss came against top heavyweight contender Joe Joyce in November 2020. Dubois rebounded quickly with an emphatic second-round knockout of Bogdan Dinu in June to capture the Interim WBA Heavyweight Title. Now, he takes on the 33-year-old Cusumano, who has won four of his last five bouts with all of those victories coming by stoppage. With a record of 19-3, his 17 knockouts give him an impressive 77% KO ratio. Fighting out of Danville, Virginia, Cusumano most recently knocked out Gregory Corbin in November 2020.

“I am ready now to push on and build on the WBA interim title I won in my last fight,” said Dubois. “I am thrilled to take the show on the road and look to win the American public over. I am told the American public love heavyweight boxing, so it is time to introduce them to Daniel Dubois. I will make sure it is a name they won’t forget.”

Already a crossover star after his runner-up finish on the hit U.K. reality TV show “Love Island”, Fury will look to follow in the footsteps of his boxing-rich family and establish his own championship legacy. The 23-year-old from Manchester is 6-0 with four knockouts, having most recently earned a unanimous decision over Jordan Grant in June. Fury will be opposed by Alameda, California’s Taylor, an experienced MMA competitor who dropped his sole pro boxing appearance in 2017 by split-decision. The 32-year-old’s MMA experience includes five Bellator fights and a 7-5 overall record with wins in his last five fights. Taylor is currently training in Puerto Rico and is a regular sparring partner of Jake Paul as he prepares for his bout against Woodley.

“American fans can, as always with me, expect a big dirty knockout,” said Fury. “That is what I say and that is what I try to bring. I want to put on a masterclass performance and show levels again and show how much I am improving. This is another step on my journey to world titles.” 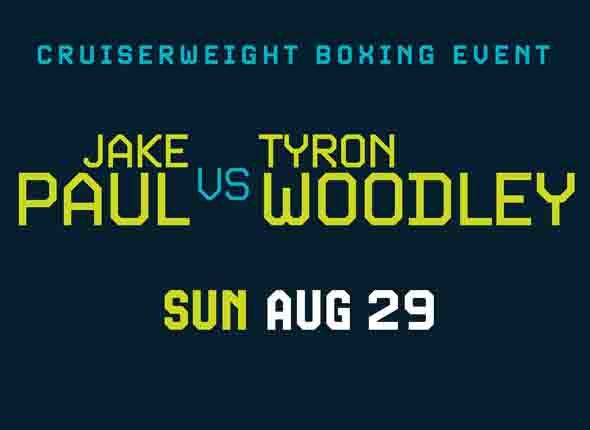