Multi-GRAMMY® Award winning duo and Curb | Word Entertainment recording artist FOR KING + COUNTRY announces its “A DRUMMER BOY CHRISTMAS | The 2022 TOUR Experience.” Brothers Joel and Luke Smallbone will be bringing their annual Christmas spectacle to audiences in arenas nationwide over 14 dates including a stop at Cleveland’s Rocket Mortgage FieldHouse on Sunday, December 4, performing hits from their Top 10 A DRUMMER BOY CHRISTMAS album, as well as selections from their recently released Billboard Top 200 record WHAT ARE WE WAITING FOR?

Fans will have the chance to see the duo perform their No. 1 charting, world renowned version of the holiday classic “Little Drummer Boy” as seen on ABC’s CMA Country Christmas HERE, as well as their #1 hit single “For God Is With Us,” and many more.

“Yes, we might very well be in the heat of summer - but the holidays will be here before we know it, and with them we’ll be bringing you ‘A DRUMMER BOY CHRISTMAS | The 2022 Tour Experience!,’” says Joel and Luke Smallbone. “Our most elaborate, meaningful, joy-filled - and of course - rhythmic tour of the year all while celebrating the greatest news the world has ever known!”

During the 2021 holiday season, FOR KING + COUNTRY re-entered the mainstream chart with its celebrated rendition of “Little Drummer Boy” hitting No. 13 on Mediabase’s Holiday chart, and No. 21 on the AC chart.  The track also hit No. 14 on Billboard’s AC chart. Likewise, in the tradition of the duo’s once a year holiday circuit, their 2021 Christmas tour repeated history and opened to sold-old arenas across the nation.

FOR KING + COUNTRY is one of the music industry’s most respected and decorated duos.  Brothers Joel and Luke Smallbone have been awarded four GRAMMY® Awards, seven GMA Dove Awards, a Billboard Music Award, and 16 K-LOVE Fan Awards; and their 11 No. 1 songs have produced an astonishing 1.8 billion career streams.  The RIAA Platinum-selling act’s live show has been hailed as a must-see concert event that continues to wow sold-out crowds whether in the U.S., Australia, Germany, Netherlands, or New Zealand.  FOR KING + COUNTRY’s WHAT ARE WE WAITING FOR?, released this year, became the duo’s second Top 10 album on the Billboard 200; following their RIAA Gold certified album, BURN THE SHIPS, which also debuted in the Top 10 of the Billboard Top 200 Album Chart. The duo has had seven consecutive No. 1 songs including “For God Is With Us,” “joy.,” “TOGETHER” (feat. Kirk Franklin & Tori Kelly),” and the 11-week Platinum smash, “God Only Knows.”  The global hitmakers have collaborated with a diverse list of artists including Hillary Scott, Dolly Parton, NEEDTOBREATHE and Timbaland, amongst others. 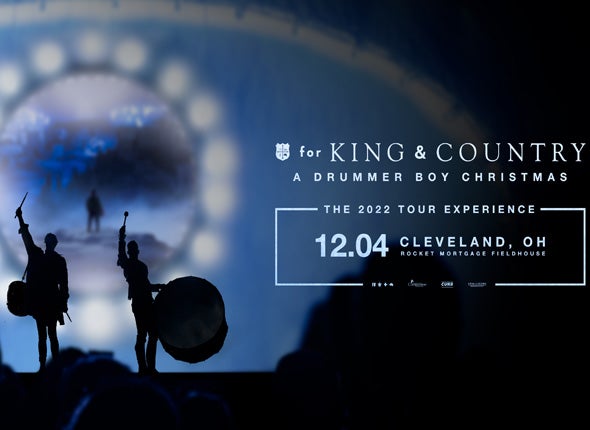